Spark Joy with Sonder, the Whimsical Weed Brand 'By Creatives, For Creatives' (That Means You)

For Faun Chapin and M. Paradise, the co-founders of Sonder, the goal goes beyond developing and providing the “high-est quality” cannabis products, per their fantastical website. Simply put, “we like to delight and surprise and reward,” Chapin, the company’s CEO, told Ember.

To many, that may be easier said than done, especially after a trying year with compounding stressors and griefs. But the ability to tap into details and experiences that are inherently happy-making is what defines Chapin and Paradise’s work, from the intricate cutouts on Sonder’s vape packaging, to the gleeful feeling you get when allowing their sublingual Space Crystals to dissolve under your tongue. If you’ve ever let a pack of Pop Rocks fizz in your mouth, you know a bit about how that feels—now add the pleasant high of a full-spectrum cannabis product.

“It was like they had transformed into children. They had this totally giddy, giggly look on their faces and they were just so completely delighted. I was like, ‘That’s amazing, that’s exactly what I wanted to do,'” Paradise, the CMO and who Chapin calls the “creative director,” said of watching customers try Sonder's Space Crystals. The product launched in July 2020 and comes complete with a detailed—and, yes, delightful—video explaining their technology. And as Paradise noted, that giddiness was the goal all along: “Especially after the year that we’ve had, to be able to bring a product to market that literally makes you smile and laugh and giggle… that’s the holy grail for us, from a product developer standpoint,” they said.

Chapin and Paradise first met in New York City when they were working in branding and product design and development, but it wasn’t until the two moved to California and were running their own creative studio that they were inspired to launch Sonder. After the state passed Prop. 64, which legalized recreational cannabis, the couple realized they could create the kind of cannabis company they wish they could buy from. 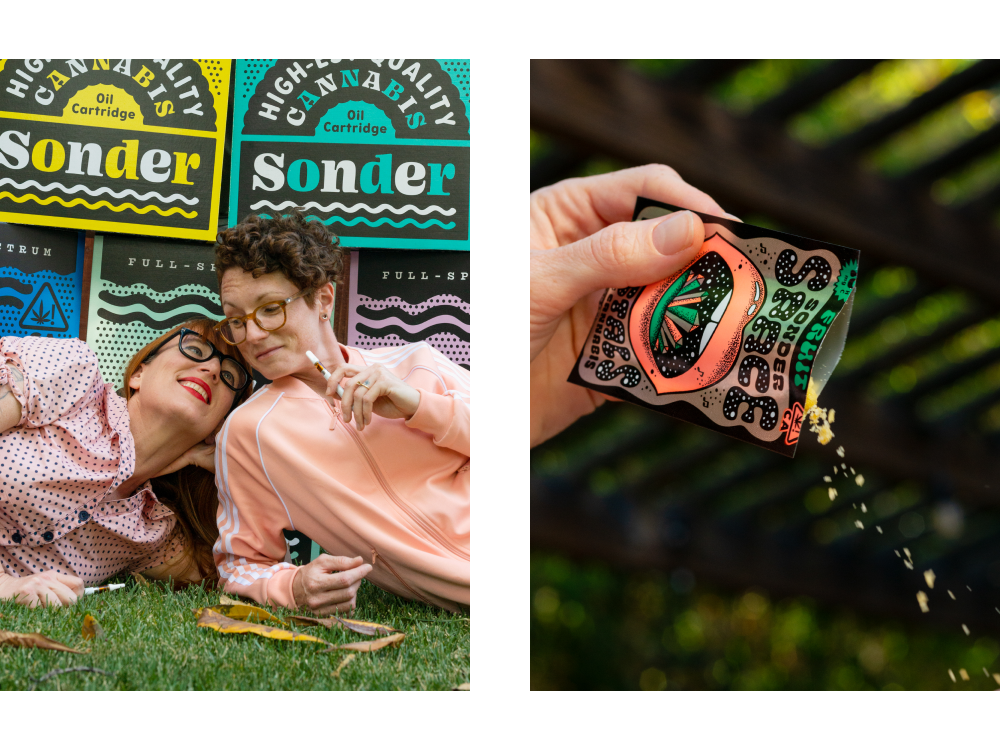 “We looked around and we said, wow, there really is a lack of brands and companies out there that speak to creativity and the community aspect of cannabis in that fun, wonderful, world-building way, which is how we see cannabis,” Chapin remembered. Yet rather than be discouraged, she said it was “an amazing opportunity for us to speak to and build a world for the creative who uses cannabis.”

Paradise agreed—in conversation, the couple often build on each other’s ideas in concert. “We also saw it as an opportunity as creative people first and foremost, and as makers and artists and designers, we saw it as an opportunity to create a new economic engine for our creative vision,” she said. “Ultimately we are partners in life and love, but we’re also creative partners in business. And what Sonder really is, is this imaginary world that we’ve created between the two of us that we’re always adding and inputting into and fleshing out—it’s the real-world embodiment of all those creative dreams and visions.”

The term “sonder” dates back to the Dictionary of Obscure Sorrows Tumblr account, which first posted a definition for the word in 2012. Calling it “the realization that each random passerby is living a life as vivid and complex as your own—populated with their own ambitions, friends, routines, worries and inherited craziness,” the account named the feeling that while you may be the protagonist in your own story, you're also a peripheral character in the stories of others. Yet what if, instead of feeling insignificant in the face of that relativity, each of us found a way to celebrate and connect with each other over our collective narratives?

“We say Sonder is the moment of connection to yourself, to someone else, and to the world around you,” Chapin added. “It’s in that moment of connection and presence that we’re our most creative selves because cannabis allows us to be present. There are very few other plant-based or even substances that allow us to be so present in the moment and in life, and that presence and creativity can lead to really interesting community-building. That’s what we’re trying to build.”

The daughter of a long-time cannabis cultivator, teacher, and user from the famed Emerald Triangle in northern California, Chapin grew up knowing that cannabis could be a means of survival and even a way to thrive, especially for women and people who wanted more out of life than what mainstream society prescribed for them. Her brother and sister, she noted, are also master growers in their own right, and she stressed the importance of sourcing full-spectrum cannabis that has grown under the sun’s singular UV rays. Yet while Paradise initially used cannabis as a “tool of connection and creativity,” as well as a sleep aid for their chronic insomnia, Chapin steered away from cannabis use until she moved back to California with Paradise—a full-circle moment. 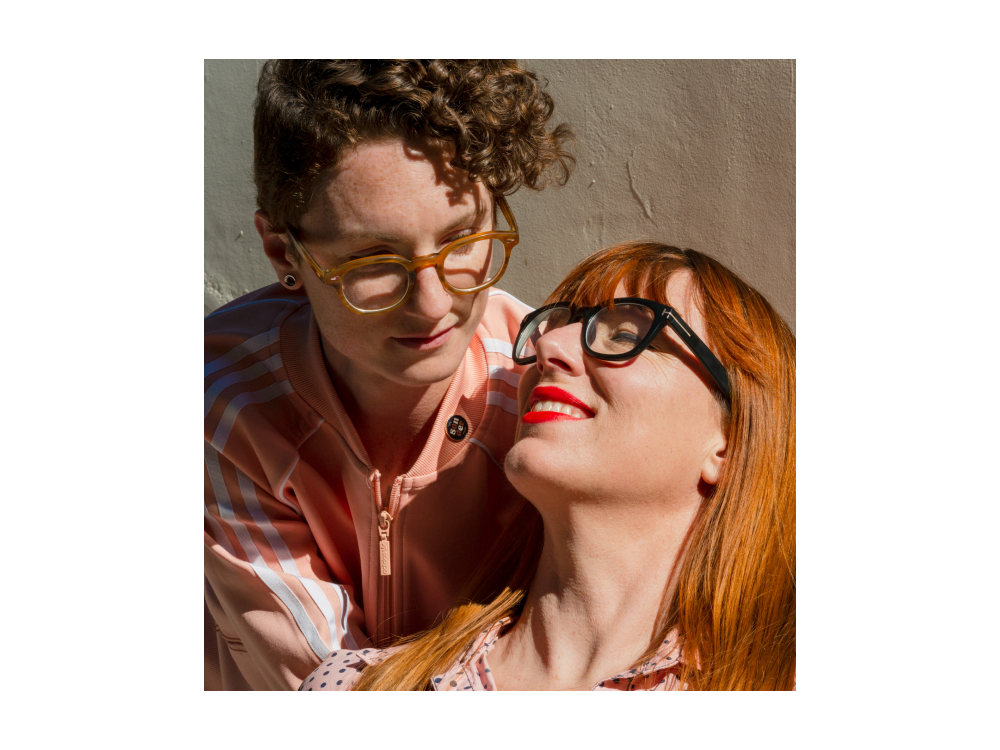 “I started using CBD and it completely shifted my life,” she said of the non-hallucinogenic cannabinoid. “But when we started Sonder... it’s really important for us to not ever seem like we are just a group of people trying to come in. We have that authentic connection to the land, to the cultivation, and to creativity, and I wanted to enjoy cannabis.” As a result, she “trained like an athlete” to build her tolerance to cannabis, and the duo now use cannabis for everything from their creative work to hiking and hanging out with friends and community.

They launched Sonder with a cannabis oil vape that is now available in seven different strains, and followed with Space Crystals, which boast flavors like Peachy Passion, Stoned Fruit, and Pineapple Party. As a sublingual, the crystals metabolize differently in the body than an edible would, and tend to kick in much more quickly, Chapin notes. But when it came time to develop a holiday flavor, Chapin and Paradise tapped into a personal and powerful source of inspiration and creativity, and launched a strawberry champagne flavor called Cheers Queers, which Chapin called “a toast to our chosen family” and an opportunity for community healing and togetherness, especially given how painful the holidays can be for many LGBTQ+ people.

Though Sonder’s team is tiny, every employee at publish time is a member of the LGBTQ+ community. That wasn’t by design, the founders note, but given the ways in which many LGBTQ+ people use creativity as a means of self-expression and survival, it’s not surprising that their collective would evolve in that way. And while Paradise noted that their and Chapin’s identity as queer women was “the component of our story that we’re not really telling as much” prior to the launch of Cheers Queers, the duo are now finding plenty of ways to celebrate their community through their products and branding, without the need for explanation to a non-LGBTQ+ consumer.

Sonder’s products are inherently colorful, and serve as a joyful antidote to the pervasive and troubling practice of “pinkwashing” products to appeal to LGBTQ+ consumers. Their work, Paradise said, is all about breaking people “out of these one-dimensional stereotypes and into fully-fledged human beings whose queerness is one component of their overarching story. For us as branding experts, the question was, how do we do that as a company? How do we embrace our queerness and behave as people and not deny that part of ourselves, but celebrate that?” After all, she noted, LGBTQ+ organizers and activists have been at the forefront of cannabis rights and legalization for decades, and advocated for cannabis as a treatment during the AIDS epidemic that began in the early 1980s. 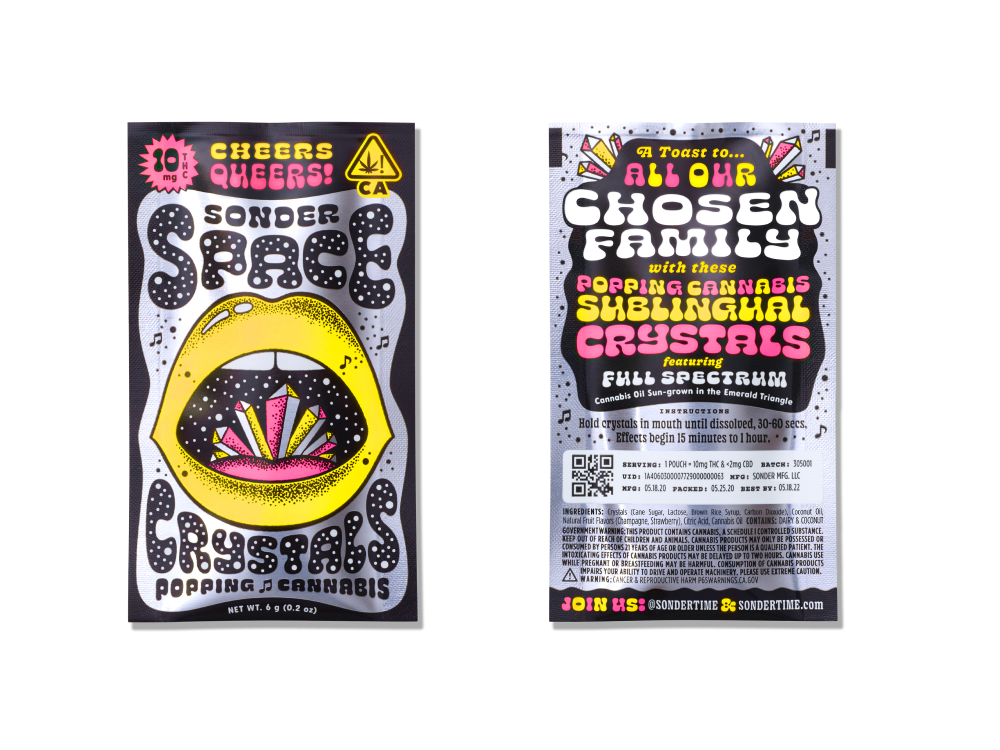 Yet as creatives, they know there is still space to improve. The cannabis world, Chapin said, “has a long way to go to actually be inclusive, and to create a supportive environment so that the queer community and other people of color can actually be welcome into it… There are too many people incarcerated and too many who are suffering.”

As activists in their own lives, Chapin and Paradise are heartened to see the ways in which Black, brown, and LGBTQ+ activists have come together to change the cannabis industry for the better. They’re also finding ways to create a future-minded community, whether that’s partnering with other LGBTQ+-owned cannabis companies like Drew Martin; with the queer women of color behind cannabis-forward Los Angeles pottery studio POT; or with the pop vocalist VINCINT on an upcoming show.

But they also hope that the future of inclusive cannabis is as full-spectrum as their products—that investors also support companies that don’t have cisgender, straight white men as their founders; that sellers stock women-owned brands, brands owned by Black, Indigenous, and other people of color, and LGBTQ+-owned brands without some sort of implied quota; and that consumers support these brands year round. After all, women are still women once March is over, and LGBTQ+ people still need products that speak to them authentically long after the last Pride parade ends each June.

And through it all, creative people can and will find ways to be creative, and to express each element of their identities, either solo or in tandem. That spark is what drives the team behind Sonder, who are hard at work developing new products to inspire and delight their customer base. “Sonder is by creatives, for creatives,” Chapin underscored, noting that the definition of that word extends far beyond designers or artists, and includes anyone who is “trying to find solutions that are impossible."

“Creatives often are weird oddballs who have a different way of thinking and seeing the world,” she added. “And we find that to be beautiful.”

These statements have not been evaluated by the Food and Drug Administration. Products are not intended to diagnose, treat, cure, or prevent any disease.
Back to List
‌
The Future of Cannabis: Presidential Election Edition, Part II