In 2014, a team of archaeologists discovered a well-preserved set of solid gold bongs in a Russian burial mound. These artifacts were created by the Scythians: a nomadic society who raided, traded, fought and partied their way across Asia, more than two thousand years ago. Here’s the story of these extraordinary people—and the sacred rituals in which they used the cannabis plant. 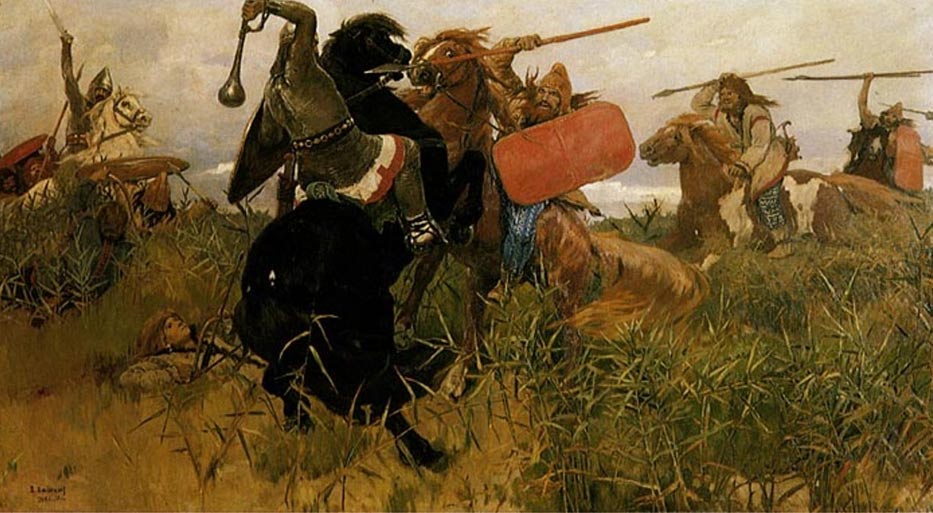 A world before roads

Imagine standing on a windswept prairie 2,500 years ago. No highways or telephone poles, only gray storm clouds massing above the mountains on the horizon. No far-off rumble of trucks or trains, just the occasional song of a bird—and the patient silence of an endless sea of waving grass, white-capped with the first blossoms of spring.

This is Central Asia, whose belt of steppe forms the largest unbroken swath of grassland on earth. A rider here can gallop from Hungary all the way to China—carrying gold, wine, silk, spices, and sacred mind-altering plants across the Eurasian continent.

Your traveling companions here call themselves Saka—“The Ones Who Roam”—though history will remember them by a more fearsome name: the Scythians. They’re famous for three things: their skill in battle, their free-roving lifestyle, and their love affair with recreational drugs—especially cannabis, which they consume in heroic quantities, in a staggering variety of ways.

Let’s spend some time getting to know these people better, and learn more about how they celebrated this unique plant. 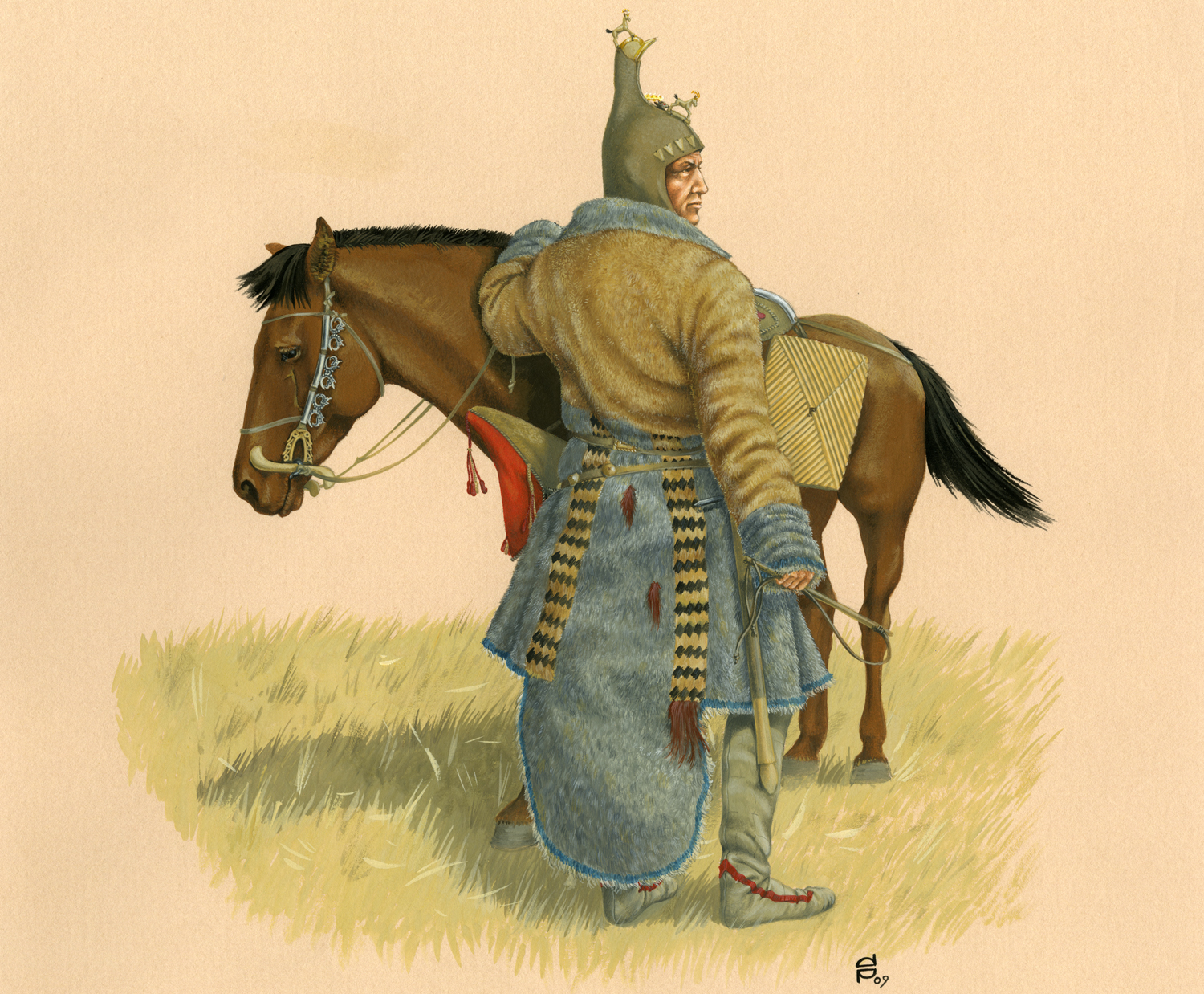 Who were the Scythians, exactly? A motorcycle gang like the Hell’s Angels isn’t a half-bad comparison. At their heart, Scythians were an Indo-Iranic people whose entire culture revolved around horseback riding. For all the thousands of years before cars, horses were the fastest mode of transport on earth, and Scythians reveled in their skill and speed in the saddle—riding, raiding, smuggling, and trading from Eastern Europe all the way to India and China.

But the biker comparisons don’t stop there. Scythian men were proud of their long hair—sometimes shaving the sides, “Viking” style—and both men and women adorned their bodies with intricate networks of tattoos. In fact, one Scythian princess has left us some of the oldest preserved tattoos in the world, thanks to her people’s custom of burying nobles in the dry, freezing tundra. 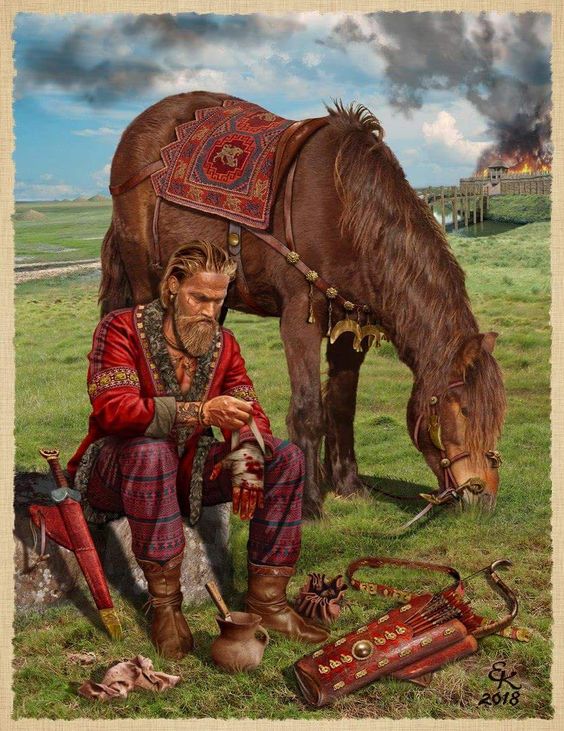 Both men and women decked themselves in gold chains, rings, leather vests, and riding boots. They were crack bow-shots on horseback, and trained both their boys and girls to fight ferociously. In fact, many historians now believe that tales of Amazon warrior women—including Wonder Woman herself—come from reports of Scythian women’s prowess in battle.

And like hard-riding, hard-fighting peoples throughout history, Scythians knew how to throw a legendary rager. Their wine consumption was so lavish that it inspired art on Greek drinking vessels—and even the idiom “drunk as a Scythian,” as in this bit of ancient poetry:

I would be [merely] intoxicated, Not gripped with maenadic frenzy. Let us not again this evening With our shouts and noisy uproar Get ourselves as drunk as Scythians.

But the Scythians reserved some of their most unique customs for cannabis—which they clearly regarded as a plant worthy of special veneration.

“A most agreeable vapor”: ritualistic hotboxing of cannabis pyres

The earliest known description of Scythian culture comes from a man who may never have met a Scythian in person: the Greek writer Herodotus, who travelled the Mediterranean in the 400s BCE, collecting stories about the far-off lands and peoples of the “exotic” Orient. Herodotus’s accuracy can be hit-or-miss. For example, his chapter on India contains the Greek world’s first mention of the cotton plant—while a more imaginative section describes giant gold-mining ants.

Even so, a lot of what Herodotus says about the Scythians turns out to be on point. He vividly describes their horse-centric lifestyle, their practice of burying chieftains in soil mounds (which have been excavated by modern archaeologists), and their custom of partying with wild abandon at weddings and funerals.

It’s in a description of funeral rites that Herodotus describes one of the Scythians’ most unusual customs, involving vast quantities of cannabis:

They set up three pieces of timber leaning to each other, and laying a good number of woolen bags close together, throw burning stones in to a hollow space left in the midst of the wood and bags… The Scythians put the seeds of hemp under the bags, upon the burning stones; and immediately a more agreeable vapor is emitted than from the incense burnt in Greece. The company, extremely transported with the scent, howl aloud...

To summarize, Scythians built enormous cannabis pyres, from which they spent the evening inhaling smoke until they howled like wolves. In fact, another translation of this passage calls the setup a "vapor bath”—leading scholars to speculate that the Scythians may have actually built hotboxed weed saunas, similar to Native American sweat lodges.

It’s tempting to speculate about the late-night singing contests and poetry freestyles that must’ve unfolded around these aromatic blazes—but alas, Herodotus’s description leaves those to the imagination.

More recent archaeological discoveries, however, have revealed that Scythians knew all about other ways to smoke cannabis, too. 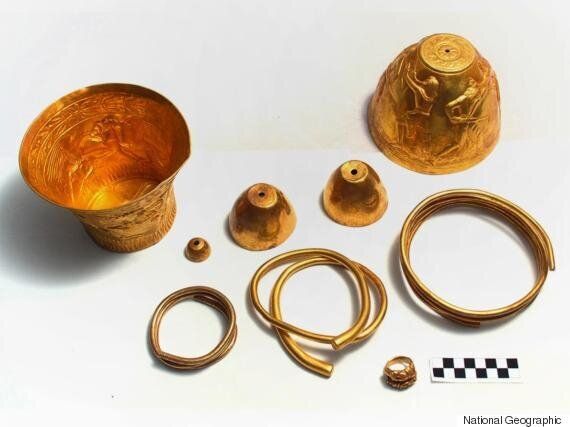 A golden "chalice" fit for a king

Scythians loved to flaunt their bling just as much as any self-respecting modern gangsta. Warriors decked themselves with gold rings and bracelets, draped massive gold necklaces around their necks, and pinned back their hair in golden combs decorated with intricate battle scenes. Wealthy chieftains were often buried with lavish treasure hoards, including gold goblets, swords, and spears.

But one particular Scythian use for gold seems to have been unique in the ancient world. In 2014, a team of archaeologists excavated a Scythian chieftain's burial mound in Russia, and discovered a well-preserved set of solid gold bongs.

Not only were these “chalices” impressive works of art, adorned with scenes of warriors in combat—they were cleverly engineered, incorporating systems of stems and tubes that any modern glassmaker would find impressive. What’s more, laboratory analysis revealed that these bongs had definitely been put to use: they contained 2,400-year-old residue of cannabis resin (no word on whether the scientists tried scraping and smoking it).

When and why did these Scythian kings smoke from their golden waterpipes? That’s trickier to determine. These pieces may have been reserved for use in sacred rituals lost to recorded history. Or they might’ve been used only on special occasions, like the funeral described above.

Ben Thomas is a journalist and novelist who's lived in 40+ countries. He specializes in telling stories from the frontiers of science, history, culture and the cosmos—and the points where all these fields intersect.

These statements have not been evaluated by the Food and Drug Administration. Products are not intended to diagnose, treat, cure, or prevent any disease.
Back to List
‌
Kick Off Pride Month with These 13 LGBTQIA+-Owned Cannabis Brands